There was a period with several sexual assaults in the streets of Stavanger. In this situation Hero Norge took an initiative that led to the establishment of "Contact Forum for prevention of rape" in 2010 with the following participants among others: Stavanger municipality, the Immigrant Council in Stavanger, the Police Stavanger, the Church City Mission in Stavanger, the Rape Crisis Unit Stavanger, the Refuge Section Stavanger and Hero Norway.

As a result of discussion in the forum Hero Norway engaged a project manager to develop a course that could be used in the asylum centers.

In 2012 Stavanger Municipality was rewarded a Crime Prevention Price for its efforts to prevent rape. The price was handed over by the Minister of Justice Grete Faremo.

The purpose of the project was initially to prevent asylum seekers to commit rape or to become victims of rape. Another purpose was to involve the residents in the asylum centers in prevention of sexual violence and rape.

The main idea behind the concept is to engage participants in an effort for safety. Participants are involved in discussions as potential witnesses to situations where there is a risk of violent behavior, and not as potential abusers or victims.

The course covers topics such as boundaries, norms, cultural codes, communications, and various forms of sexual violence, domestic violence, sanctions and consequences for victim and abuser

Most immigrants are interested in their local environment and will protect their reputation. We have to make them aware that this can only be achieved through common work, we must all do it together.

It is difficult for many refugees and immigrants to understand the freedom of behavior in Norway. We have to discuss the unwritten laws in our country.

The key point for the police was to establish cooperation between two sections within the police, criminal investigation and community police. Criminal investigation police spent time analyzing the patterns and characteristics of different crimes. Then they contacted to the community police and informed them about their findings and what they should pay specially attention to, and how they best could secure immediate proof if something happened.

Every time they saw a situation that was potentially risky they should be on alert. The police was allocated more resources both for investigation and patrolling and specially their presence in the streets proved efficient.

Police were also dependent on cooperation with other groups. The municipality organized contacts with a wide range of organizations and got everyone to contribute. Taxi drivers, immigrant organizations, rape centers, natteravnene, asylum centers - there were many who took responsibility.

Hero Norway took an important step and ensured thorough training of those who came from totally different cultures. The teaching program dealt with the Norwegian social norms, culture, morality and ethics - with emphasis on sexuality, communication between sexes and consequences of violence

«"This course was very useful for two reasons: One was to obtain general information about the consequences of rape can be both victim and perpetrator. The second was to learn about ways to help each other to prevent and reduce the number of rapes in the community. " 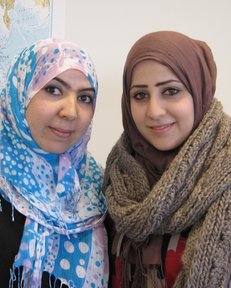